How well do you know the sustainability community in Kingston? If you are at all plugged in, you know Dan Hendry. And if you don’t know Dan, well, you’re not as plugged in as you think! Dan has been working on various sustainable projects in Kingston since 2009. I sat down with Dan and he shared his thoughts on Kingston and Sustainability. Take it away, Dan! 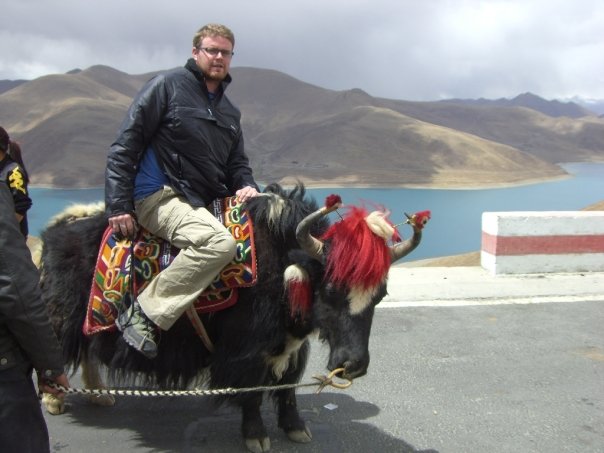 Sam: How did you find yourself in Kingston?

Dan: I grew up in Lindsay, my mother is from Bath, and I have family from all over the region. I left Lindsay after high school and studied in Toronto, Victoria and Sweden, and lived in Seoul. I realized that you don’t get a good perception of a place until you leave. It reminds me of one of my favourite books, “The Prophet”, which is how an outsider has a perspective on a society or culture that the people living there don’t or can’t have. My travels also gave me an idea of what I didn’t want. For my value set, for what I want in life, the grass is the greenest here. You have the ability to know anyone in the town with one or two degrees of separation. If I’m driving and something happens, like a driver cutting me off, I don’t yell or swear at them because I may know who they are! Because my family is here, I also have a fantastic support system in place. In a community like Kingston, if you’re outgoing and involved it’s easy to meet a lot of people, and establish connections with people with the same values. There is a youth and an energy to the city, which we get from RMC, Queen’s, and Saint Lawrence, but there is also age and wisdom. There are a lot of really good things going on in Kingston. I’ll die here.

How did you get so heavily involved in the sustainability field?

I have a Masters’ degree in Strategic Leadership Towards Sustainability from Sweden. When I moved back to Kingston, it did what I had to do, including laying floors and other part time jobs. I found an opportunity with a pilot project downtown with Philip Brown and Randy Cluff, who wanted to open a storefront community hub centred on sustainability. I arrived when it was just an empty building, and started a year-long internship. I helped build it up, including finding grant money to pay for my own salary! I was also able to network with key people I wanted to meet, including becoming involved with Focus Kingston. Focus Kingston was the citizen group that helped lay the foundation for the Sustainable Kingston Plan.

After my internship ran out, I got a part-time job with the Limestone District school board, working on their BCIP building construction program. They were building their 70th house, and wanted to build a unique one. They called it the Harvesting House, and their goal was to try and get as close to net-zero energy as possible, including the use of geothermal, double-walled design, solar panels, and other techniques. I operated the outreach centre, delivering tours and presenting the concepts behind it to both students and community members. Now the job is a mix of outreach, facility management, and providing support to the school board’s sustainability committee.

I also got an interim job at the City of Kingston’s Sustainability and Growth department. My job there included everything from signing up community partners (including your humble author), planning the community forums and other events, managing the website, and anything else the group needed to promote sustainability in Kingston. I was really lucky to be involved in forming a lot of sustainable initiatives.

What do you think the future of sustainability in Kingston will be?

If you want to implement sustainable initiatives, you have to measure, and to do so you need metrics and ways of quantifying progress. The first thing we need are baseline statistics, so we know where we started. Then you need to create goals so you can evaluate your success. For example, if you’re trying to lose weight, you need to know what you weight right now. Then you need to define what “losing weight” actually means. Is it 5 pounds or 50 pounds? What is the timeframe? At Kingston we have our indicators, and starting point. I think we continue to grow in a few areas, such as creating programs and measures that are quantifiable. I think Sustainable Kingston can become a centralized clearinghouse for good information, good expertise, and facilitate local collaboration. I don’t mean just a networking hub, but also a way of doing projects that bring people together and focus on making the community better. I see these projects providing a reason to put different people in the same room together talking the same language.

I hate the word “they”. It’s always “they gotta fix this”, or “this is a problem”. The reality is that we are all in this together. It reminds me of a story from a while ago when I was driving with my cousin. He was hit a pothole, kinda cursed and said “the City should really fix that”. He drove for a bit, and then said, “You know what, if they were fixing that pothole I’d probably just complain about the delay from fixing it!” It was a good reminder that these systems we have in Kingston, from schools to governments to business are all interconnected. To make the systems better, we have to try and counteract the inertia from years gone by. The inertia isn’t confined to Kingston; it’s also Ontario, Canada, the US, North America, and the world.

I always like to throw out 1804, 1927, 1960, 1974, 1987, 1999, and 2011. Those are the years that the population of the Earth increase by a billion people. Most of us are able to get what we need, but we don’t have to think about the system we live in. The impact of the interconnected global system is tremendous, and I think we need to focus more on preparation, such as local food supply connected with surrounding communities, in case there are shocks to the system. And in an interconnected system, why can’t Kingston be a hub? We have local companies, like, Hayabusa, Eikon, and Metalcraft making great products and exporting them all over the world.

The famous picture of the Earth seen from the moon helped give me my opinion that we have to be mindful of our impact and what resources we use. We really are a big rock floating through space. If we want to make changes, the easiest place to focus our efforts is right here in Kingston. If I do my best to make Kingston a good place, and other people do the same, that’s it. Hopefully everyone else, wherever they are, do the same in their communities.

Thank you for your time, Dan.

Dan is on TV. Watch him here!

Connect with Dan on LinkedIn.