You may not know Shawn Whalen, but if you live in Kingston, chances are you know his voice from the midday show on 98.3 FLY FM. In addition to his on-air duties, Shawn is the promotions and marketing director for all Bell Media radio stations in Kingston. He has been working in radio for over 10 years, both as a radio personality and behind the scenes. Let’s listen, as he answers questions about radio life, the radio universe, and everything. 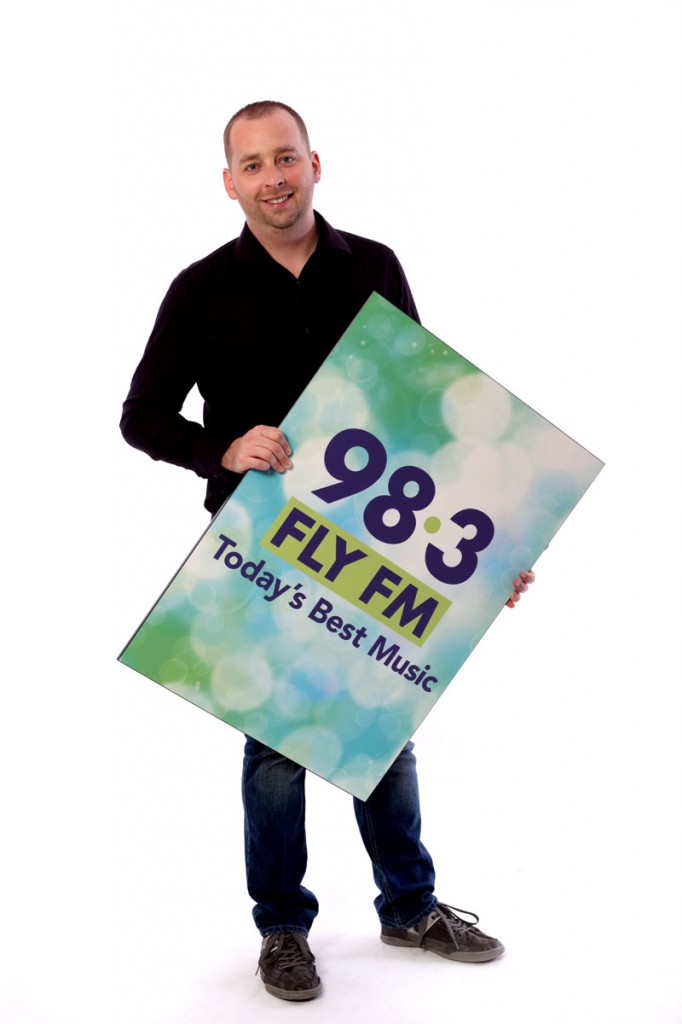 Not pictured: the voice of a (manly) angel

Shawn: I have always been interested in the media. I grew up in Tweed, and while at high school I did a co-op placement at a radio station in Belleville. I then took a course in radio broadcasting at Algonquin College. While there, I took a part time job at an Ottawa radio station, and eventually I became the overnight announcer.

A Career in Radio

In radio, if you want to move up, it is often easier to move to a different city or station than staying in the same spot. While I was in Ottawa, doing overnights was a great start because I was on air in a major market. The hours really sucked though. While there I was only responsible for the on-air content, and had no other tasks. I moved to Timmins to work at a radio station there. At this smaller station I wore many hats. In addition to announcing I was given marketing and sales responsibilities, which rounded out my experience.

I knew the manager of a radio station in Kingston.  When an opening came up due to a maternity leave, and I came on a temporary contract. I’ve been here for five years this month, so I guess it worked out!

The Radio Life Chose Me

There are so many aspects to this business. In addition to hosting the midday show, I am the promotions and marketing director for both 98.3 Fly FM and 98.9 THE DRIVE. I am also the webmaster for both stations. I am the assistant program director, overseeing the sounds of the stations, including the type of music, the imaging (the sounds you hear between songs), and the announcers. I get involved in other aspects of radio including writing copy, production, and sales. What I do is so broad and I feel I could work for pretty much any company in the marketing department.

Though we have some non-traditional income sources, radio advertisements are our bread and butter. Advertising rates are based on the radio station’s audience. Part of my job is to make sure that we have an audience that is both desirable and definable. Both of the radio stations I work at are well positioned, attracting a demographic of men and women between ages 25 and 40.

I market the radio stations to potential listeners to drive up the audience in our key demographics. I advertise on other mediums, including direct marketing, Facebook ads, print ads in local newspapers, and forming strategic alliances with organizations such as the United Way. I also oversee the promotion of our stations on our own airwaves. For example, we run contests to encourage listeners to tune into our programs at certain times.

Radio has certainly changed, however. People and families used to sit around the radio to listen to sports, plays, and other programming. Now it is all about instant gratification. Announcers talk a little, and then get right to the music or other programming. You tune in, get what you need, and get on with it. Most people listen in short bursts; in Kingston a lot of people listen for 20 minutes in the morning and 20 minutes in the evening while going to and from work.

With radio, listeners can get access to local content immediately. You can put a local news story on the radio in a matter of minutes. With TV, you have to wait for the 6 o’clock news or the newspaper the next morning. In Kingston, 98.3 FLY FM and 98.9 THE DRIVE alone can reach more than 60,000 people who live 20 minutes or less from the centre of Kingston. This is unlike television or the internet blasting a campaign aimed at everyone.

How to Advertise on Radio

The advantage of advertising in radio is that you can easily reach your target demographic if you advertise on the right station. The main goal is to deliver the right message to the right audience the right number of times. The key is to create an ad that generates a very specific call to action, and repeat it enough times.

I was at a Chamber meeting and a guy asked me “Does radio really work? And will it work for me?” I told him that yes it works. Will it work for you? Maybe, depending on your business. It turns out he ran a funeral home. I told him that my radio stations wouldn’t work, because we don’t cater to his target demographic. If he wants to reach people 50 years old and older, he should advertise on the oldies station.

If you want to advertise on the radio, craft the right message, play it the right number of times, and it will work for you.

Practical advice from a radio luminary. Thank you Shawn!